Today we went to the Prado, the main national art museum in Spain. They are featuring a Goya in Madrid temporary exhibit, but the classic (Goya and Velasquez) masterpieces were what we wanted to see. There are over a thousand pieces of art on display (out of a collection of about 7,500) at any given time, and the building is (of course) huge.

As soon as we got there, a tour guide approached us and asked whether we wanted her to show us around. I was apprehensive but the price was right so Ana escorted us through the museum.

What a wealth of very interesting information she shared! There is no way to take in everything in the hours we planned to be there, but Ana showed us the highlights, or the must-see works. She had details and trivia about each one and I found it all fascinating. I left there thinking I may take an art history course, and that I want to learn more about the Spanish royal family. Some of them were characters and I haven’t read any Spanish history in decades.

Next we went to the barrio de La Latina – the Latin neighborhood of Madrid. It has narrow streets, old shops and restaurants, and is buzzing with people and action. (There’s a picture below of a street performer who looked like a gold statue. He was just sitting in front of a chess board. It was only after a few minutes that he stared out and revealed the whites of his eyes. He drew quite a crowd and I wondered how many hours he sat there motionless.)

We had lunch at a little Latin cafe and did a some shopping (to include the peach-colored sweater pictured) then headed back to the center of the city. Dinner was light: some tapas (small plates to share) and a bottle of wine at a restaurant near our hotel.

Tomorrow we pick up a car and drive toward Lisbon. We won’t make it there in one day, but I’m not sure where we’ll stop. I’ve really enjoyed Madrid! 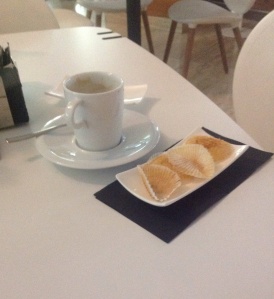 Cafe con leche is why I’m awake right now, at one a.m.

A very-believable street performer posing as a statue.