Today we planned to take a tour of the old and grand opera house, the National Theater of Sao Carlos. The opera house was rebuilt almost right away after the 1755 earthquake that leveled Lisbon (and killed 30,000 people). The king tried to rebuild most of the city within a year, and the original theater had only opened months before the quake. So this one was built in 1756 (and took just six months!) and it’s magnificent.

Our hotel tried to arrange our visit, but didn’t get a response to two emails. The tour started at 11, so it was suggested we get there early and see if we were able to get in. They gave us a copy of the email they sent, thinking it might be helpful to have.

When we arrived at 10:30, all the doors were locked. I stopped a woman standing near the place: she spoke English, she was in charge of the guest relations, and she welcomed us with open arms. It turned out that the email address the hotel was using had a letter missing so she never got either of them. She seemed so concerned for our happiness that it was astounding.

She told us the group at 11 was made up of German and French visitors, and that we wouldn’t get anything out of it since she wasn’t going to repeat the information in three languages. So she let us sit in one of the viewing boxes for just a few minutes and watch a rehearsal in progress. We were content with that unique experience but then she said we could come back at 3 and watch the whole rehearsal of the opera that’s opening 3/25, La Cenerentola.

We did go back and we sat in a box with her friend, Maria (who quickly became my best friend in Portugal) and watched and listened to the rehearsal. It was quite a thrill to be sitting in almost the best seats in the house and watch opera stars from around the world (there’s an American in the orchestra and we were asked if we knew him, as though all of us from the U.S. know each other.)

Then she gave us a backstage tour, snapped a few photos of us, kissed us goodbye, and we were on our way – four hours later. Maria has invited us to her home in Belem, the area we visited yesterday, on our next trip – which could be soon because I love it here.
—-
(Yes, those are new spring pants and a new top seen pictured. I may have enough clothes now, but will still probably do some shopping in the week ahead (why not?!)

There’s no talk of food today because I am writing this before we go to dinner. 9:30 reservations are late for this girl but that’s what our friends from last evening arranged for us, since the live music doesn’t begin until 11. So by the time I get back to the hotel, it will be very late. ) 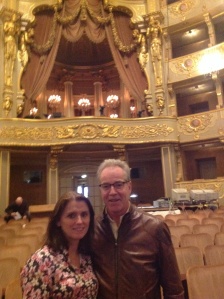 At the opera house. That’s the President’s box/viewing chamber behind us – it used to be for the king. 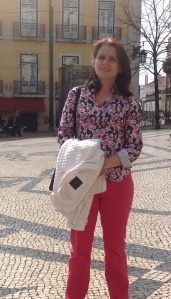 It was a beautiful spring day here. I shouldn’t have brought my jacket since I had to carry it around all day. 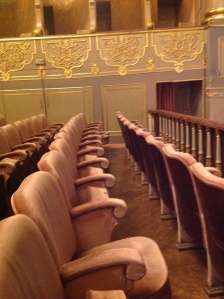 Another view of the magnificent opera house. You’re not allowed to take pictures of the stage, so I didn’t dare. I’m trying to be a great ambassador!