We left Lleida at about 9:30 this morning. There was something a little off with that hotel, the Nastis, and although I guess I slept okay, I was glad when we left.

We headed toward Barcelona and arrived in the city at about noon. Arriving was really just the first hurdle. Next we had to return the rental car by finding the Hertz drop off in the middle of the city. It was tricky because of all of the traffic on the major road, the inability to see the numbers on any building as we quickly drove by (there was no way we were going to slow down), and again: our lack of GPS.

We finally figured out where the storefront should be, but of course there was no Hertz sign there. We turned around and drove back. At the time I thought we were very close to the address, a long bus drove by us slowly, completely blocking my vision. We decided to park the car and walk and look. We found a spot in the street right away, which is as improbable as finding one quickly in New York. We were able to find Hertz and get rid of the car.

We need to get another bag to carry all of the things we have bought, but for now we have a bunch of shopping bags. They were sort of cumbersome to deal with as we tried to hail a cab, but we did it, got to our hotel in a really nice part of the city, and checked in.

Another improbability: I found an Apple Store just a five minute walk from our hotel. We went immediately because I needed to get my iPad rebooted. Fortunately they were able to do that as I waited (there were probably 60 or more people sitting at tech support tables). We were out of the store in an hour altogether, and then had some tapas and wine. My iPad now is wiped clean, but I’m okay with it and happy it works (note to self: do not upgrade until you read what people say about it.)

We walked around by our hotel this evening, and arranged to take a tour tomorrow of la Sagrada Familia, a huge church which is the major attraction of its type in Barcelona. It is interesting especially because construction began in1882 and won’t be completed until 2041.

A cute tapas place we went to 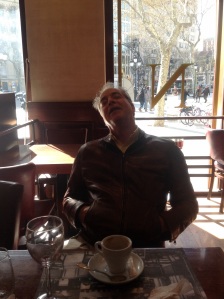 Long drive, long ordeal, long time putting up with me 🙂