I had heard it raining overnight, but was surprised to see it was snowing this morning. Yesterday it had been sunny and warm south of us and now, in the Rioja wine region of northern Spain, it was much, much colder.

I haven’t bought any clothes for below-freezing temperatures, but bundled up with what I have. Our plan was to walk to the gated entrance to the village (it turns out our hotel is right outside it, maybe a ten-minute walk) and check out Laguardia. We couldn’t do that because the snow turned to pouring rain. We waited it out, then drove to the entrance and dashed in through a gate.

Laguardia is over a thousand years old and is like another world. Surrounded by huge stone walls, it is easy to see how it provided the people of the city safety from attack. What is remarkable is that 1,500 people live there in these modern times.

It is a totally inclusive walled village made of blocks of stone. By “totally inclusive” I mean that the people never have to leave the walls of the city and few, if any they have cars. There are shops, restaurants, bars, services – it seems as though they have anything they need.

As soon as I dashed in, I marveled at the narrow stone-lined streets. I couldn’t take pictures since we were running in the rain. We were not really sure where to go since there are just doors within stone walls. Everything looks very similar. Some doors are people’s homes, others are businesses. There are no storefront windows, so you have to know where you’re going. This posed a problem because of the rain, since we couldn’t just walk casually around. And of course we had no idea where we were going.

We ducked into one tiny shop that had some nice sweaters displayed near the open door. The saleswoman/owner was nice although she spoke almost no English. She was able to direct us to a great restaurant after I bought a sweater there, and we dashed up the street because it was still raining.

After a delicious lunch, the waiter suggested we check out the restaurant’s cellar. Underneath the entire walled city are wine cellars. They have been separated under businesses and homes now, so are not connected as they were when they were first built as one huge place to safely store the village’s wine. It was interesting to see the small connected rooms that snaked underneath the building.

Tomorrow we are going to tour a winery and check out more of the inside of the walled village. We are hoping it is not raining or snowing so we can walk around.

The old and grand restaurant where we had lunch today.

The wine bar was not open when we were there in the late afternoon, but it was interesting to see the setup. We may go back tomorrow evening to see what it’s like with people there.

A sweater and pashmina I got today in the walled city 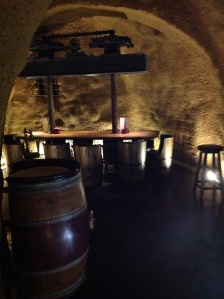 The caves underneath the restaurant. Wine is stored there, but it is also a wine bar at night.